The list below is arranged in alphabetical order of the village or town of the tower to which the ringer belonged.

William Eames
(This name is recorded on a certificate in Crayford belfry but to date it has not been possible to trace him definitely.)

We are grateful to Mike Godfrey who has kindly sent in details of other Dover ringers who served in the forces and were fortunate enough to return home. We will probably never know what these men endured, but it seemed fiitting to remember them here for services rendered

Frederick A Kennet (APC) – on the clerical staff

This account of a peal at Dover makes poignant reading, too. Edith Cavell was the daughter of a Norfolk parson and became governess to a family in Brussels, a position she held for some years. In 1895 her father became seriously ill and she returned to England to look after him. This experience convinced her that her vocation in life was not really as a governess, and she trained as a nurse, later becoming matron of the nursing school at the Berkendael Institute back in Brussels. She was apparently completely humourless, aloof and generally unapproachable, but she was scrupulously fair. She doesn’t sound the sort to have risked her life on a daily basis for a year sheltering Allied troops and helping to get them back to their own countries, but this she did. Even after the Germans had occupied Belgium and turned the Institute into a Red Cross hospital she kept up her work. Eventually German suspicions became so great that they arrested Edith and after a short trial she was sentenced to death by firing squad on 12 October 1915. She was just under two months short of her 50th birthday. She was buried near Brussels but in May 1919 her body was exhumed and brought back to England. King George V attended her memorial service in Westminster Abbey, and she was finally laid to rest in Norwich Cathedral some five miles from her birthplace at Swardeston 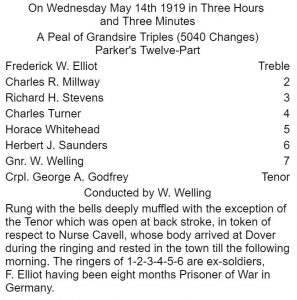 Kevin Moon from Charing has come up with another ringer who should be on the Roll of Honour [writes Hazel Basford, who goes on to say] I visited Charing recently to go through their Parish Magazines for WW1 for references to the VAD Hospitals there. Kevin is another WW1 addict and he was browsing through them. He did not mention it at the time, so perhaps he saw it later but I had a letter from him this morning saying he had found a reference to a memorial service held in 1916 and “a muffled peal of bells rung by his old comrades in the Belfry”. The service was for a Charles Colbreay who had died in Gallipoli in 1915. I checked the Annual Reports and found the 1912 Report includes one C Colbreay at Charing.

It really is amazing that the record is still being brought up-to-date after all these years. Don’t assume that, just because the Roll was first compiled over 80 years ago, it is necessarily complete. If there is any possibility that there is a name from your tower which possibly ought to be on the list, do please contact Hazel, and she will make every effort to sort out the facts.

I posted a note about the Roll of Honour on the Kent Family History mailing list when someone suggested posting information about war memorials at this Remembrance time. As a result the granddaughter of George Mills of Borden has got in touch with me. She knew nothing about his ringing although she attended Borden church as a youngster.

Since the above was written Hazel has had another email, this time from Derek Morey, who writes as follows:

Dear Hazel,
I can’t tell how pleased I was to find the web site for KCACR. I was searching through web sites for the Royal West Kent Regiment and other Kent sites, when I came upon the Roll of Honour. I was delighted and proud when I found that my grandfather Tom Cox was on that roll. After logging onto the main KCACR website I read the details about the memorial bells in Canterbury Cathedral, and the memorial book that has also been presented to the Cathedral.

My mother knew that her father had been in the choir at East Farleigh, but not that he was a bell ringer. She still has his confirmation card from East Farleigh church. Tom Cox never saw his daughter as he was on active service when she was born. My mum who was born in Maidstone has visited the church in the past few years. My wife and I, and our two children have visited the Pozieres memorial where we took some photographs of the plaque with my grandfather’s name. We have also been several times to the small cemetery at Vadencourt. I have found some information regarding the location of the regiment prior to the battle of 21 March 1918 and it appears it was based in the Vadencourt area. As there is a unknown soldier of the Royal West Kent buried there we look on it as a possible resting place for Tom Cox.

My mother only has one small faded photograph of her father. I wonder if you found a photograph of him when you compiled the book? She thinks that he was actually born in the village. I wonder also if we would be allowed to see the memorial book if we visited Canterbury Cathedral? I have lots more questions but I will leave them for another time, also if you need any information, I will help you if I can.

This sort of news makes the jobs of webmaster and archivist all seem worthwhile. Do please keep on sending in your reminiscences.

In November 2002 Hazel writes to say “I have been sent a poem about the Hayesmore brothers of Rolvenden, written by Peter Cox, husband of their great niece. It was published in the Kentish Express, 10 October edition but Mrs Cox kindly sent it to me as she knew I would not have seen the paper here in Broadstairs. The poem reads as follows:

In the Great War when the Nation called
And things were looking bad,
Three Rolvenden brothers wanted to act
As many others had.
The East Kent Regiment were recruiting
At Tenterden town hall,
And all three joined the famous Buffs
In answer to the call.

Marching, drilling and digging
And shooting practice too,
In year hardened soldiers
But not hardened enough it’s true.
No you can’t be prepared enough lads
Nor can anyone tell.
For what lay ahead was so dreadful
You’ll be marching into Hell.

And now the boys were on the Somme
Deafened by the guns,
Waiting to hear the feared command,
“Over the top! Walk – don’t run!”
Hubert was killed almost at once
On the battle’s first day,
Whilst brother Fred was wounded,
Dying next day where he lay.

Louis died some months later
On the battle’s very last day.
He joined hundreds of thousands others
To win a few miles, so they say.
Hubert is buried at Mametz, on the Somme
The other two were never found.
They’re remembered on the Rolvenden Memorial,
And also on foreign ground. — The Somme. 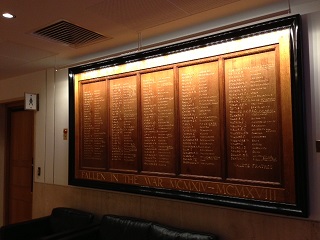 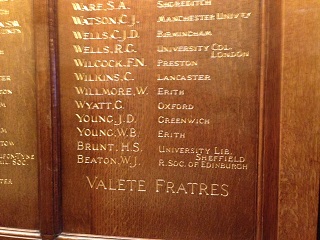 New information from Hazel, May 2013:

Yesterday I went to a day course at the British Library. We had the opportunity to go to their stores, which was quite exciting. On the way, in one of the non-public areas, we passed a First World War war memorial and I noticed that it commemorated British Librarians and that places were listed alongside the names.

I immediately thought of the Erith ringer, William Barton Young, and sure enough his name was included. Attached (above) are a couple of photographs which I hurridly took on my phone for the record.

When we were in France last summer, Hedley and I visited his grave for the first time and, as usual, played the tape of the Canterbury bells and left a Remembrance Cross.