Dedication of bells at Stone-next-Dartford

Peter Sims, as KCACR Chairman, attended the service of dedication of the new bells at Stone on 16 January 2011. He writes: It was a very lengthy (2 hours), but enjoyable service attended by the local mayor and MP as well as various District ringers amongst a congregation of about 200, who then stayed behind for a “ringers’ tea”.

The following is an extract from the order of service:

On 14 January 1638, the spire of St Mary’s, Stone was struck by lightning and caught fire. The five bells thought to have been in the tower at that time were destroyed in the blaze which gutted the church. Earlier, during the reign of Elizabeth I, the queen was supposed to have praised the sound of these bells and called them “my nightingales”. Just over 373 years later, almost to the day, the Bishop of Rochester dedicated replacement nightingales. The Manor of Stone has belonged to the Bishops of Rochester since 995.

Of the bells dedicated, six came from the redundant church of St Paul, Homerton. These were cast in 1890 in Whitechapel Bell Foundry and paid for by the Worshipful Company of Grocers, patron of the former church of All Hallows Staining in the City of London. The bells for Homerton were cast from those hanging in the tower of All Hallows, which remains to this day in Mark Lane in the City. Within earshot of the Tower of London, these very bells, or their predecessors, must have been heard by Elizabeth I in 1555 when as princess she spent two months as a prisoner in the Tower. On her release she gave thanks to God at All Hallows and presented silken bellropes to the church.

Thanks to Peter for the two photographs below. The details of the bells are extracted from the order of service. There is still a fair amount of work to do, but it’s hoped that the bells will be in and ringable in time for Easter. 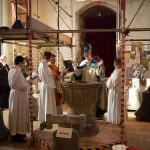 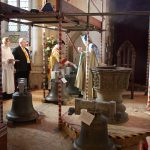 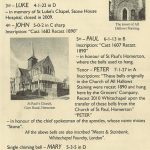