After the great disappointment last year, of being unable to raise any interest in a striking competition, we were very pleased that 8 bands were cajoled into entering this year. The competition was held at High Halden, a pleasant ring of bells but difficult to hear in the ringing room, which also doubles up as one of the entrances to the church and has some of the kitchen facilities in it. Mary Marshall became very adept at running in to get water for the urn in between bands.

The judges, Sue and Chris Bassett from Staplehurst managed to find a sheltered spot where they could hear the bells and missed being soaked when the last band finished ringing just as a massive black cloud drifted over. It was such a near miss that they had to do their final calculations in the porch while thunder rumbled around outside.

The overall standard of ringing was very acceptable and Sue’s introductory comments were quite flattering. We had decided to ring 240 changes despite there being 8 bands (and one or two moans) and Sue complemented us on our decision, as all the bands settled in the second 120 to give a truer picture of their ability. Chris commented on each band in turn and then gave us the results as follows (the marks are the total faults from both judges).

Our thanks go to the judges for patiently judging 8 lots of 240 changes, and to Mary, Marilyn and Sally who prepared an excellent tea under trying conditions. 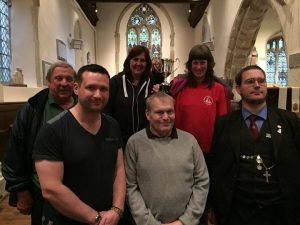