From the Medway Messenger of 17 January 2014: When the bells rang out at St Mary Magdalene Church, Gillingham, last week, history was recreated. Precisely 100 years ago, in 1914, bellringers from the armed services played out a sequence of changes, which had been composed and conducted by Sgt Fred Holden of the Royal Marines Light Infantry. The ringing lasted almost three hours and their feat is commemorated by a plaque in the belfry.

A modern band of bellringers, drawn from the Royal Navy, Army and RAF guilds of bellringers, assembled at the church to re-enact the original sequence. Just like their predecessors, their achievement is to be recorded on a plaque.

Details of both peals are available here. Of the members of the 1914 band, it is sad to learn that Pte Percy Gibbs from Dover, later promoted to L/Cpl, died in action in France on 26 August 1914. 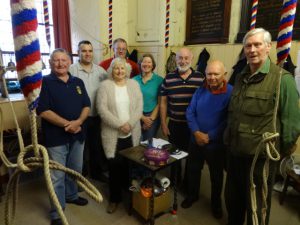 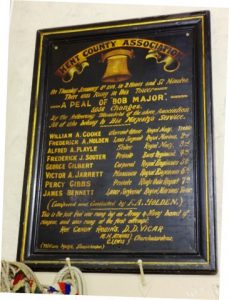