Published by jthomas on 14th November 2017

A fine Autumn afternoon greeted 23 Young Ringers, along with parents and other supporters, from the Canterbury, Lewisham, Maidstone, Rochester and Tonbridge Districts of the KCACR as they converged on the lovely venue of St Bartholomew’s Otford. Canterbury had only four ringers, but they bravely came along, acquired the only ringer able to come from the Maidstone District (well done, Boo!), and then we drew lots to give them a final, 6th ringer. 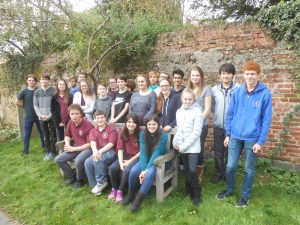 160 rows of Rounds and Call Changes on six was the test piece of the day; I believe Lewisham(with the youngest and least experienced ringers) was the only team able to get everyone together for a full practice!  The KCACR allows ringers with an upper age limit of 24 years (and 364 days!) to enter this contest, so that it can happen. The average age at Otford ranged from 15 years 8 months to 16 years 8 months; the youngest was 12 yrs 3m and the oldest was 22 yrs.

Plenty of cakes, savouries, hot and cold drinks were on offer to sustain the youngsters throughout the afternoon.  A little extra-curricular fun was had in guessing which photo (of toddler/baby) belonged to whom; a ringing wordsearch was also on offer, but mostly everyone got on with enjoying each other’s company and listening intently to the striking of the other teams. A very convivial atmosphere prevailed. 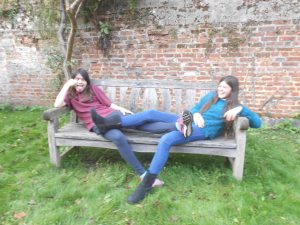 We are indebted to George Vant from Colchester, himself still a “Young Ringer”, for coming to be our judge. He was very enthusiastic and full of positive comments for each  team.

Each team was presented with a certificate and Tonbridge received the (temporary) Trophy … a glass sweet dish, etched with bells and filled with…..”Celebrations” to share! 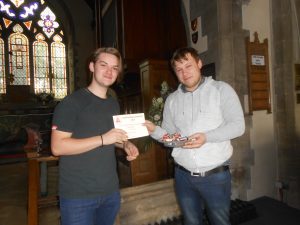 Thank you very much, George!!!

A further  hour of ringing followed on just a few miles west at another lovely millennium ring, this time the,  now augmented, 8 at Chevening. 10 young ringers rang Rounds & Call Changes on 8, Plain Hunt 7, Plain Bob and GrandsireTriples; 2 adults made it possible for them to ring Stedman Triples and 4 of the youngsters rang in Cambridge Surprise Major; a sparkling end to a most successful afternoon.  Roll on next year……!