Friday 5th July 2019: 17:50 – 18.30 9 Young Ringers, 3 team leaders and 3 parents appeared at our designated meeting point at Euston Rail Station, a very useful waiting room near Platform 16. At 17:35 precisely we reported to the preboarding desk, but had to wait a few minutes for a couple of lads who had gone to find something to eat! We were then escorted to our train by a very friendly man who found us our seats. 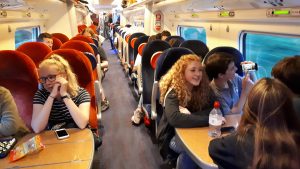 We’re on the way!

The train journey lasted all of 2 hours 15 minutes (definitely better than driving on a Friday evening!) and we pulled in to Liverpool Lime Street Station at 21:20 to be met by the 10th team member and a team supporter who had travelled separately.  A Mersey Rail train took us under the river to our hotel in Birkenhead where our rooms were assigned to us and everyone (maybe?) enjoyed a good night’s sleep.

We congregated for a good breakfast in the morning before whizzing off to sample the local trains and buses which would take us to grab rings of bells at Bootle, Walton on the Hill and Pierhead before lunch.

Accompanying parents earned their keep by searching out local supermarkets to buy sandwiches for us to eat on the bus out to Tuebrook, a very nice16cwt ring of 8 which would be a good practice tower before our test piece coming up next at St Francis Xavier. Krispy Kreme doughnuts lifted our spirits and provided an energy boost (thank you, Jane!) and we arrived at SFX to hear the Yorkshire Tykes ringing their test piece; we listened to the band from Worcester Cathedral ring their Call Changes and then it was our turn!

Up the steps, wait for our exact time slot at 15:20 and then we pulled off into the practice 5-6mins. The practice ringing was used to try out the feel of the bells and check the rope lengths, Daniel made a comment to a couple of the team, the trebles rang the signal to start and off they went into the 20 whole pulls and 180 changes of the Test Piece…… I can assure you, it is incredibly nervewracking sitting in the ringing room, counting whole pulls up to 70, uttering the agreed message and listening to the whole piece without saying a word or even looking at anyone, willing them to ring well…… and they did!!! But … how well?? We made our way back to Pierhead, enjoyed an ice cream in the sunny churchyard, had a go or two on the Mini Ring, joined in with Tom Hinks’ handbell workshops and generally relaxed for an hour. 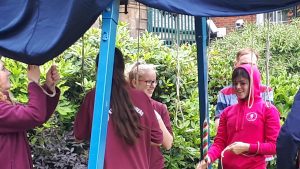 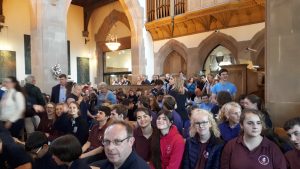 24 teams piled into the church at 18:00 to be welcomed by the vicar and David Hull, this year’s organiser.  Julia Cater, chief judge, introduced her three assistants and explained the judging: there had been no “heats” this year; all 24 teams rang their test pieces consecutively and the judges made judicious use of Hawk Ear to aid their decision making. The results were announced in reverse order, with a “GCSE-style” grade and each team came up to the front as their result was announced to receive their medals; the tension mounted as the Kent Team was not mentioned…. and suddenly it became obvious that there were only two teams left: Kent and Oxford…wow! Kent Young Ringers were placed second overall with a grade of 7 and were awarded the Ringing World Editor’s Trophy for Excellence and Oxford were placed overall winners with a grade also of 7 and were awarded the Whitechapel Trophy. Kent Young Ringers made their way to the front to receive their gold medals and Daniel Jarvis, Team Captain, received the Trophy from Robert Lewis, editor of the Ringing World.  We received many congratulatory and complimentary comments;  photos were taken outside of a jubilant team with the Trophy. 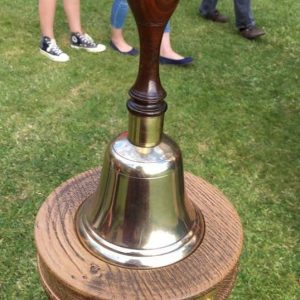 We then made our way again through the streets of Liverpool, proudly carrying our trophy, to our next port of call, the amazing vast interior of the Anglican Cathedral, glowing beautifully in the evening light. (Well worth a visit if you have never been.) Jen claimed a ride in the lift due to suffering from “old lady’s knees”, but everyone else valiantly climbed the 328 steps up to the huge ringing room… to be greeted by the sight of a hundred or so teenagers and their “chaperones” enjoying the exhilarating experience of ringing on this 82cwt 12. Youngsters were called up to have a ring; it took some people a few whole pulls to get the measure of such a slow style of ringing but everyone who wanted was able to have a go and each piece of ringing was applauded enthusiastically; there was a wonderful atmosphere. 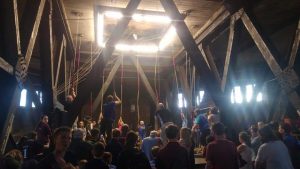 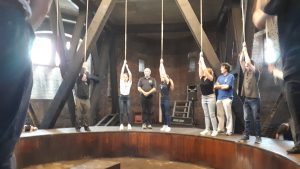 It had been a very long time since lunch so we (all!) made our way down the slightly dizzying descent to find a suitable venue for a celebratory supper (Pizza Hut proved the perfect location) and finally, after a very long day of at least 11 miles of walking, 2 train and 4 bus journeys, we returned to our hotel and sleep (I think there was a bit less of this than the previous night!)

Sunday’s itinerary included ringing for morning service at Oxton, Rock Ferry and Port Sunlight; we had to split up to cover all three and travel by taxi to fit them. The sun shone on us as we then took the Dazzle ferry across the Mersey, 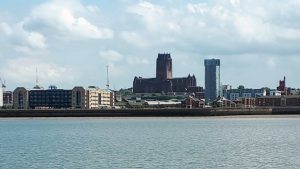 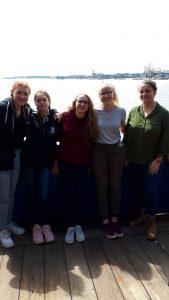 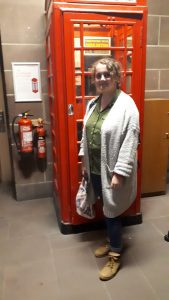 with lovely views of Liverpool from Birkenhead and from the ferry itself (named The Snowdrop). We enjoyed an hour in the sunshine on the quayside and ate our lunch before walking back up to the Cathedral to ring for 3pm Evensong; this was a much calmer ringing experience with only ourselves and a few other visitors present along with the very welcoming locals. Everyone rang Rounds and Call Changes and Neil wore a very happy face after ringing the 11 and the tenor.   Our legs were happier today as we were all able to use the lifts.

Soon it was time to leave the mighty Cathedral, designed by the architect Giles Gilbert Scott, who just happened to be the uncle of Isabel’s great-great-grandfather, take a photograph downstairs with Isabel next to the red telephone kiosk also designed by Gilbert Scott, and make sure we arrived at Lime Street Station in time to get our train back to London . This was a very quiet journey, with a number of youngsters catching up on their sleep! 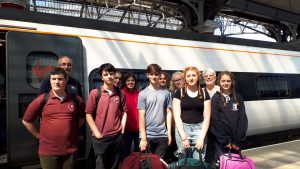 The trophy is being engraved and will been seen in various towers around Kent during the coming year. We are now looking forward to next year’s contest in York.