New ring of three discovered in the Lewisham District

Published by admin on 30th November 2010

Not to be outdone by the Maidstone District’s discovery of a ringable three at Ditton in 2010, Dickon Love sends us this item covering a similar find in the Lewisham District. 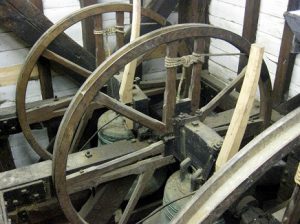 Keen followers of the lists of ringable towers may have spotted that a new tower has crept into the Lewisham District, namely St Michael, Wilmington. It had always been said that the three bells here formed a chime, with rumours even that the wheels were half wheels. However recent inspections have shown that there are in fact three bells hung for full circle ringing. In November 2010 a group from the Lewisham District went along to inspect the belfry with members of the church, including the Rector, churchwarden and James “The Bellringer”. There we learnt that the bells are normally chimed before service from the ground floor by James, chiming all three at once. The ropes (which the tower notice says date from 1981) have very short spliced-in tail ends which are ideal for this sort of chiming but quickly run out if anyone tries to ring the bells up very high, let alone to the balance.

Access to the belfry itself is very difficult as it involves propping a ladder up against a wall so that it comes within a couple of feet of another ladder that angles back across the tower to a central trapdoor. Climbing this ladder and then climbing across the gap between the two ladders is not for the faint hearted! A quick inspection of the belfry has shown the fittings to be in fairly good condition, although the frame can be heard to shunt around. The parish intends to put in a proper floor under the tower during 2011 so that access can be possible using a single ladder. At this time a better inspection will be conducted “with spanners” to establish how safe the frame is.

In the meantime, it was demonstrated that the bells could be rung up and stood, but only by the tallest people (the church doesn’t have ringing boxes). The District has however made contact with James to encourage him to learn to ring. Visitors are not encouraged to go to Wilmington to ring the bells full circle until the frame has been properly inspected and tightened, and new ropes presented. However, once this is done, there is every likelihood that the three bells could be happily rung to changes, and the church is likely to be very welcoming. Watch this space.

More details about the bells and more photographs may be found on http://kent.lovesguide.com/tower.php?id=303.