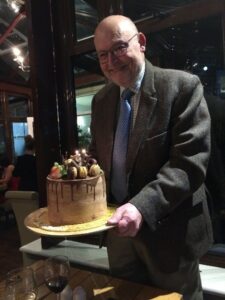 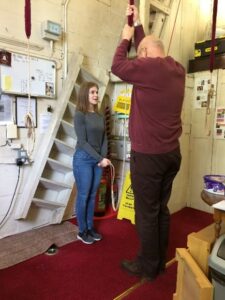 Alan teaching a learner to ring

Sadly, Alan passed away in Darenth Hospital on 22nd January. Over the past few years Alan had fought cancer bravely and was able to resume ringing as much as he could. Unfortunately, in recent months he also suffered from heart problems and was taken into hospital in January this year as he had breathing problems and had caught Covid.

Alan hailed from Northallerton, North Yorkshire and learnt to ring along with his father, Norman, in the late 1950s. He rang his first quarter peal in 1967 but recalled ringing something special for the funeral of Winston Churchill in 1965 (although I have not been able to find any documentation for this).

In the late 1960s Alan came to London to join The Metropolitan Police Service where he met Liz who was also in the police service. They were married at St Botolph-without-Bishopsgate, City of London on 27 October 1973 eventually settling in Bexleyheath. Alan eventually joined the Police Traffic Service, which was his passion.

In the late 1970s Alan’s dad, Norman was visiting London and Liz went to the local library and found out that ringing took place at St Mary’s, Woolwich. So, Alan and Norman went along the following Wednesday where they were welcomed by Hazel and Richard Bing, who became firm family friends from that day.  Alan soon joined the local band and Liz also learnt to ring – when both couples had baby boys, Liz and Hazel used to take turn to attend practices or to babysit.

Due to family and work commitments Alan was not always able to be at ringing so much in the 1980s and 1990s but he tried to support the band, when it was possible, especially for service ringing and ringers’ outings when his dad often came down from Yorkshire to join in. Sadly, Alan’s dad, Norman, died whilst ringing at St Michael’s, Maidstone on one of these outings, October 1988.

When Alan retired from the police after 30 years’ service, he did various other jobs, including some coach driving and then became a Traffic Examiner at The Vehicle and Operator Services Agency (VOSA). He really loved anything to do with transport and travel.

When the size of the bands at Greenwich and Woolwich diminished the bands joined forces in the late 1990s and eventually became The Meridian Ringers (Greenwich, Deptford, and Woolwich) with Alan as one of the driving forces. As well as being a ringer, Alan was the tower treasurer, purchaser of the tower chocolate tins, helped organising business matters such as annual dinners, polo shirts and sweatshirts, and tower necessities, especially the beautiful carpet at Greenwich. Most importantly, Alan was an excellent and very understanding teacher of new ringers.

Although he was not an expert in terms of method ringing, he was an excellent tenor cover ringer, a task he really loved, just like his father, Norman. He was particularly forthright on good bell handling technique and good striking and many of his former pupils will attest to that. He was particularly devoted to ringing for Sunday services and weddings and often helped at St Mary’s, Bexley, particularly in tolling for funerals. Alan rang about 50 quarter peals, although there may have been more that are not recorded. He was a great team member, in so many respects.

Alan was a most friendly man and if he ever saw people hovering about outside the church would encourage them to experience the surroundings by showing people round and talking about the history of the church and bellringing.

He was an excellent raconteur with a whole collection of anecdotes and experiences which he would recount especially over a couple of beers – even if there was a hint of exaggeration on many occasions!!  If there was anything you ever needed help or advice on Alan would be there. Most of all he was a loving and caring family man – husband to Liz, father to Andrew and Ruth, and grandfather to Elliott and Esther.

He will be greatly missed by us all.

May he rest in peace – and rise in glory.