A bright but chilly morning greeted everyone on Monday 17th April in the Tonbridge District, hosts for the AGM this year.  A number of towers had been arranged for open ringing on the way to Cranbrook including Hadlow & Brenchley, which the Secretary managed to ‘grab’: 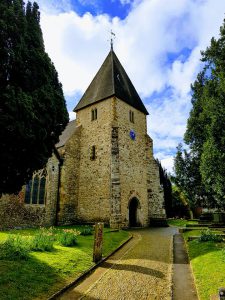 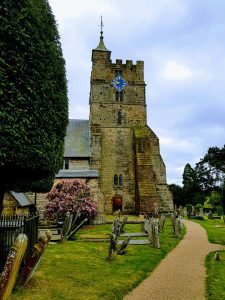 Ringing preceded the annual service at Cranbrook, with a service touch of 447 Grandsire Triples being rung by the Association Chairman, the Chairman of each of the 6 Districts and ably conducted by Dan Jarvis as a representative of the Kent Young Ringers.  Details can be found on BellBoard here. 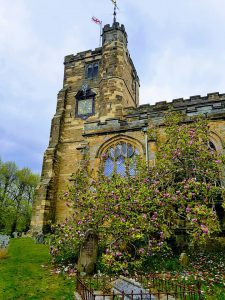 The annual service was well attended and led by the Revd Bonnie Appleton, and Revd Stanley Evans led us in remembrance of those ringers from the Association who had passed away during the past year.

Following the service, around 50 people enjoyed a wonderful lunch in Vestry Hall next to the church – a lovely beef roast dinner, followed by a variety of delicious puddings (the rhubarb crumble and custard being particularly good!).

The meeting itself got underway promptly at 2.30pm, opened with a prayer by the Revd David Cawley.  In a slight change from the norm, Mike Bullet then began by thanking everyone who had been involved in the organisation and running of the day to ensure no-one had the chance to disappear and not be recognised!  Gifts were given to David & Janet Beeken from Cranbrook as well as the chef-du-jour!

The meeting then continued in its now usual swift fashion (well done Daniel!) with Officers’ Reports all presented & then adopted en masse.  Likewise with the election of Officers for the coming year, all those that had already been proposed and seconded were duly elected by everyone present.  Allan Chandler of the Canterbury District filled the empty slot in the Extra 3 Committee members, but the Handbook Editor role was left vacant for the time being with no volunteers forthcoming.  The full list of Officers can be found here.

Next on the agenda was the rule change proposed by Dr Phil Barnes and Canon David Grimwood.  Phil & David both gave some background to the proposal and their reasons for it, and then comments and questions were taken from the floor.  It was clear there were mixed feelings about the suggested changes to the aims of the Association, and when the vote was taken the proposal was defeated by a good majority.  Thought provoking nonetheless.

Then followed a proposal from the General Committee to build a mobile ring following the generous gift of a set of 6 small bells from the Revd David Cawley.  The Secretary spoke about the history of the idea, the outcomes of the survey held during the last few months of 2016 and gave the members a view of where the project was currently.  Guest presenter Phil Gay from North Staffordshire then took to the floor to talk about his experience of mobile rings, mainly with the Lichfield Diocesan Mobile Belfry.  It was clear that mobile rings can offer a number of benefits to ringers & ringing, it is not without its difficulties, but overall he was in full support of the project the General Committee were proposing.  The Secretary then explained that the General Committee were looking for a maximum of £5,000 from the Association to complete the project and a vote was cast, with almost unanimous support being shown.

4 members achieved 50 years continuous membership of the Association during the past 12 months: Christopher Lawrance, Richard Bushell, Judith Bagshaw and John Cannell.  Unfortunately the Archibishop of Canterbury had not been available in time to sign their certificates so they are going to follow in due course.  However 3 of the 4 were at the meeting and were duly recognised for their achievement: 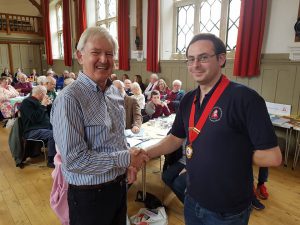 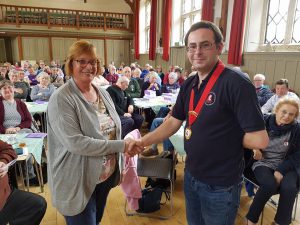 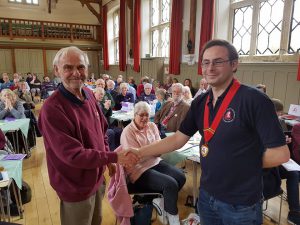 In addition, the Tonbridge District had a couple of proposals which had been made to the General Committee and were now ready to be formalised at the AGM.  Mike Bullet stood and spoke about the work of both Catherine Lewis and Stan Jenner, and proposed Catherine as a Vice President and Stan as an Honorary Life Member.  Both proposals were well received and both were duly elected by all of the members present.  Congratulations to both!

The last few items of business were soon completed, and the meeting drew to a close at 4.30pm.  Ringing continued at Cranbrook and at other towers on routes away from the District.  Thanks again to the Tonbridge District for hosting such a well-organised AGM.  See you in the Ashford District next year!