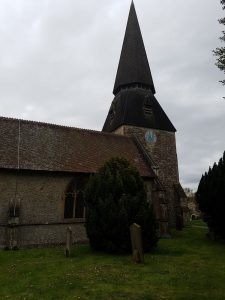 Willesborough – the venue for this years’ AGM

A slightly gloomy morning greeted those heading to the AGM at Willesborough on Easter Monday.  Several towers were open en route, and at 11.45am the service touch of 456 Cambridge S Minor was rung by a representative of each of the 6 Districts – details on Bellboard here.

The service was held at midday and was well attended, and around 50 people then enjoyed a very good lunch in the church.

The meeting itself kicked off at 2.30pm with 119 members present – one of the highest attendances in recent years.  Following on from the usual Officer’s reports, a slight change of agenda to the norm saw the proposals for change that had been put forward by Daniel Brady and Doug Davis up for discussion.  Chris Bassett agreed to take the Chair for this part of the meeting so that Daniel could speak on his own proposals.

A lot of discussion took place with varying opinions being shared, the end result being that the proposal to change from Chairmen to Masters failed but the proposal to reduce the size of the General Committee did get through with some adjustments.  The new rules resulting from these changes are now available to download from the website.

It then came time to elect Officers for the coming year.  Daniel Brady, having served the customary 3-year term as Chairman, was standing down and was replaced by Phil Barnes from Wrotham.  Doug Davis withdrew his name from the position of Secretary, and this resulted in the meeting being adjourned for 20 minutes to allow those present time to work out who might be willing to take on this role.  When the meeting restarted, Sue Bassett was proposed as Secretary with Cathy Cheeseman as Assistant Secretary and all voted in favour of this.  The role of Training Officer needed to be filled, and was duly taken on by David Grimwood.  Once again, the role of Handbook Editor went vacant with no-one in the room willing to stand despite there being a clear desire from everyone to still have a printed handbook.  All other Officers remained unchanged from the previous year, however there was no Extra 3 elected as they were not included in the new General Committee.

6 members had achieved 50 years’ continuous membership of the Association during the past year.  1 of those were present at the meeting and hence were presented with their certificates signed by the Archbishop of Canterbury, and Brenda Davies accepted Martin’s on his behalf – photos below: 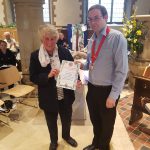 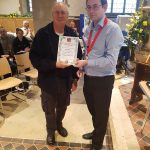 Chris Bassett receiving his certificate from the Chairman

Peter Smith getting his certificate from Phil Barnes on 14th April

As the meeting came to an end, the Chairman gave a vote of thanks to everyone that had helped to make the day a success and then proceeded to hand over the Chain of Office to Phil Barnes: 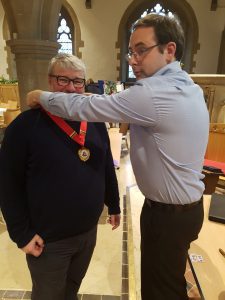 Phil receiving the Chain of Office from Daniel