A full compliment of 6 District teams descended on Herne in the Canterbury District for the 8-bell Striking Competition on Saturday 2nd July.  Soon after 9.45am, even though the Tonbridge District hadn’t quite arrived yet due to traffic, the draw took place and the competition began at 10am.

Ben Kipling was judging from behind the church, out of the way of the teams and the tower entrance.  As an added bonus, there was a local brewery selling beer in the churchyard – a welcome bit of refreshment once the teams had been and rung their test piece!  In delivering the results, he said that there was a high standard of ringing throughout the competition – expected really given the relatively simple method of Grandsire Triples.  The results where then read out in reverse order, with the final positions as follows:

Congratulations to the Canterbury District team on a well-deserved victory. 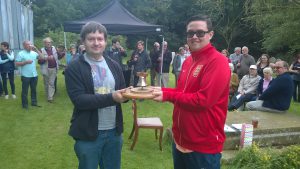