Exeter pulled out all the stops for a fabulous day as they hosted this year’s Ringing World National Youth Contest. The Cathedral was vibrant with youngsters and a number of mini-rings, handbell workshops and stalls showing all that ringing could offer youngsters.

3 car loads of teenagers and their “minders” started the weekend with a really good journey on Friday afternoon evening, with sleep seeming to be the main activity as they recovered from CCF camp, exams and school! We found our base hotel on the outskirts of Exeter and met up for a couple of card and guessing games before retiring to bed. Breakfast at 08.15 helped us ease into Saturday  with our first ringing on the lovely eight at Heavitree. The memory of last year’s queues inspired us to arrive early and we were able to have the tower to ourselves and have a little practice before wending our way into Exeter itself. Our first stop here was the Cathedral itself, a hive of activity and open to the general public as well as a multitude of youngsters in team shirts of all colours from all over England. This was a time to enjoy handbell workshops, a variety of mini-rings (Kent seemed particularly proficient on these and their prowess was mentioned on the Bellringers’ Facebook page by Scott Adams from Devon) and for adults to catch up with other team leaders and ringing friends. Great fun was had on the Denmisch simulator tucked away in its home in Exeter Cathedral School; our team had another little practice of their test piece here, but were then overcome by hysterical giggles as the sound of the bells changed into sheep baaaing and horses “neighing”!

A little walk took us to our contest tower at St David’s where doughnuts fortified our ringers before ringing their test piece…. a very good effort, but not quite on a par with the leading teams this year! 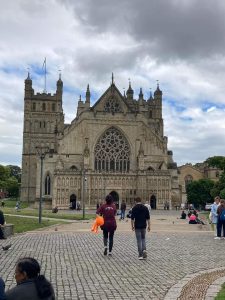 Expecting to ring a 72 cwt tenor 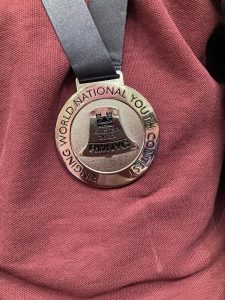 New medals this year..issued to all participants.

Team mascot, Oscar, the octopus, kept us company throughout the weekend!

Our next stop was the Cathedral again with time for a photo call outside the cathedral and a quick sandwich lunch before meeting up at the tower steps. Here we were greeted with the news that there would be a delay as there was a problem with the tenor clapper but they were putting the old clapper in. So we waited a while and then climbed (a good step, but not so far as Liverpool!) and traversed the path through the buttresses, only to find Matthew Hilling having to tell us that an all-important nut could not be located, so the tenor could not be rung! We were still able to enjoy a good ring here with 3 or 4 of our team able to ring the 11 in rounds and call changes.  Plain hunt also featured before it was time for us to descend and cross the green with lots of time to enjoy the little bells of St Petrock’s. The rain caught up with us during our walk to the final tower of the day, across the bridge at St Thomas’, a little balcony ringing room here with bells that weren’t so easy to ring!

Groups of coloured shirts congregated outside the Cathedral while we waited until the time we could  re-enter; I hope we were just far enough away (across the green) for those attending Evening Prayer inside not to hear our youngsters joyously and LOUDLY cheering on a younger team playing football (with an inflatable ball) between the buttresses of the cathedral!

The evening entertainment started with the results of the contest; a total of 23 teams (7 in the method category and 16 inthe Call Change category) entered this year, with young ringers travelling from as far afield as Newcastle and Cornwall, as well as Kent. Huge congratulations to the winners: Sussex (method) and Essex (Call Changes); the standard was very high this year, with Kent being  place joint 10th. Pizza and evening activities followed with a few people being wrapped in loo paper(!) anda parachute game before we retired to our hotel again for a rerun of Ben’s saucepan game (guessing the name of a well-known real or fictional character) which again caused considerable hilarity. (Phil Larter featured again, in the tradition of the KYR, but he’s getting a bit old hat now!)

Adults caused the pre-breakfast drama this year, with one leader being ill in the night (various contingency plans quickly being thought through!) and another leader losing the car key during an early morning swim at Exmouth! A train journey courtesy of Chris Bassett, holidaying in the area, solved the key situation while the rest of us, barely awake for breakfast at 07.30, forged on with the day starting with ringing on the lovely 12 at Crediton for morning service.  Joe and Callum had their first taste of ringing Cinques here and acquitted themselves really well. Now down to 2 cars we drove on to ring at Mere just off the A303 en route home. The locals here were very welcoming, and had announced our session here in the notice sheet for the day… they were so pleased that a group of young ringers were ringing their bells and asked us to write what we had rung in their visitors book: good striking in R & CC, Plain hunt, P B Triples and Major, with Neil turning in the slightly challenging tenor!

A very convivial lunch at The George followed and then we took the road back to Kent; my car upheld its “debating” tradition with a wide range of topics loudly explored!  This brought a great weekend to its close with everyone appearing to enjoy themselves thoroughly, ringing some lovely bells and meeting up with young ringers from around the country.  My huge thanks to everyone for making this weekend possible and especially to the KCACR for supporting and funding this vibrant opportunity: THANK YOU!