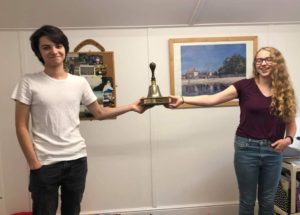 Almost a year after the RWNYC contest 2019 in Liverpool the engraved plinth and its handbell topper of the RW Editor’s Trophy for Excellence were united. The handbell has been hosted by each member in turn since last summer and had been “residing” with Laura near Penshurst since 10th March. The plinth had gone off at the end of last summer to be engraved and I was able to collect it from the present RW editor on 14th March. It then stayed in my house for several weeks before I dropped it off to Jamie in Cudham. With the relaxation in rules the 2 halves of the Trophy were brought together towards the end of June. Unusually, the 2019 Trophy will stay in Kent for a few more months until the next RWNYC contest, whenever that may be….